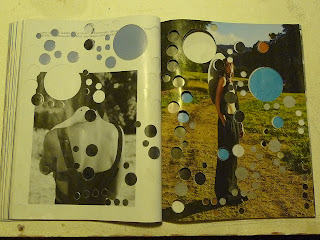 Six pages from the sixth volume.
The first volume disappeared. The second one, MC06990701-2, from the same period, summer 2001, was first exhibited during a short weekend event at Nicolas Leus' place, late summer 2009. Again some years later someone wrote a short essay on it. The essay was on artists books and the lady who wrote it took MC06990701-2 as sample.
Three unfinished specimen followed, most of it during 2013.
Getting daily on it takes about a month. The circular pattern begins at the front page, but the tough work starts with page four, as from that page on with each new page two up to twelve pages or more need to be controlled over and over again and this for each singular cutting. 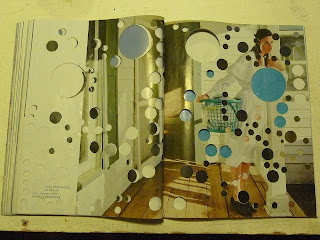 The basic idea, simple as it is, is to reduce the magazine as a whole to an almost endless series of coloured holes.
From page four on each hole has a left- and a rightwing colour.
Mistakes are treasured with utmost care. 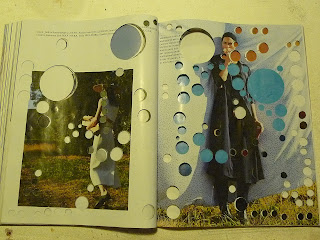 Part of the features of each page disappear and with the formula, strictly restricted to circular units, a hidden and largely unexpected, new pattern emerges.
Busying myself on it I always thought of these patterns as being there, immanent as you may call it, and it didn't take sophisticated techniques, far less sophisticated anyway than those necessary to make what one may call a homesick bourgeois life style magazine, oversized in its stylish and slightly perverted approach of fashion and bourgeois life style; a sharp pincer and a set of circular iron tools, transparant tape to restore some of the damage and a pencil to mark a note every once in a while, that's all. 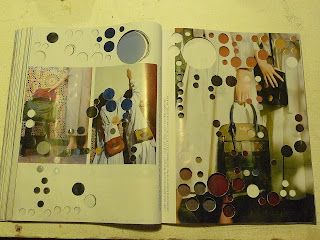 Now, writing on it, I remember an essay that I had to write, just out of teenage with no more damage than a cold and a headache, and the naive but strong intention to ignore art history and its headpimping amount of incurable imagery, especially when it came to what to think of it. Unable of even thinking about what I could have written on art practice in general, or, if needed, more elusive or even strictly personal, I took one of these nude magazines I used to get at the newsagent around the corner, a sharp knife and a ruler, and cut the whole thing to a chessboard pattern, restoring each page using dice-patterns; for each part of the achieved puzzle one made one turn right [or left], two made a double turn, three turned the square-sized fragment upside down, with five it made a turnover towards the backside of the page, six I can't remember. I added a more or less lenghty, typewritten note to each page finished, failed to restore the zine in its unique entirety, and handed it to the counsellor, who took a look at it with a bizarre, nerve-wrecked twist of one of her most generous and brilliant smiles and never said a word on it. 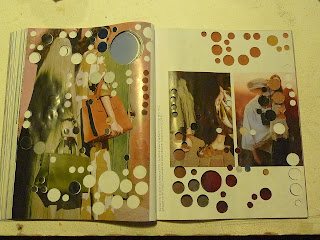 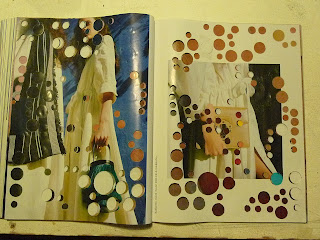