Yeah. Right. I had been drinking coffee, & doing some of the things I supposedly had to do, as David Ayleward and Steve Eagles came through, followed by Ted & Thibault.
I knew Ted & Thibault of course, as Various Artists had introduced them to his crox-show last year. Ted as well recalled how nice his residence at Flandria Hotel had been. I hadn't met Dave and Steve.
Dave, travelling light, with nothing else but some minor tools & a drum basket he couldn't miss, had the comfort of a SONOR Swinger dated 1975, the most recent set Merlyn bought. His material and likewise that of The Singing Painters, since early 2011 a Sound Guerilla having Merlyn and Me and no one else.
Steve and Dave ordered a beer. They had two hours before Peter from YellowTape would turn to the sound-check. Dave made the drumset, used a screw driver to tune the thing, Steve hung around ripping cords, Guy dropped by, Ted tried his horn, Thibaut watched the proceedings. For an hour or two we had nothing else to do.
Thibaut went to Flandria as he was the only one who had no need to get the sound-check clear. For some time Steve went on picking the strings of his green guitar. They had left, he and Ted and Dave, to the Turkish bakery, when Peter from YellowTape came to the place and began to do his thing, getting an unexpected load of material to the setup. This took an hour. After that Ted, Steve and Dave did the sound-check. Peter from YellowTape mentioned the idea to record the life set. Ted and Steve and Dave agreed on that. Yeah. Right.
A girl entered the hall. I am too early, she said. Yeah, right, you are, I said. 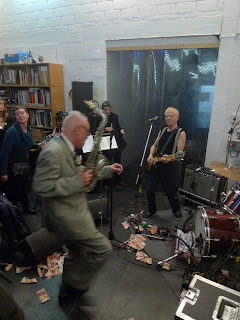 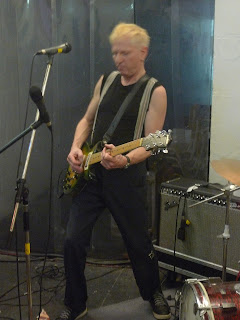 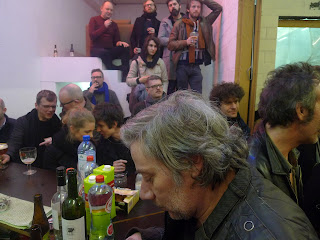