In de auto luister ik naar Brian Eno op Here is what is van Daniël Lanois. Mooie plaat. Zegt Eno: 'What would be really interesting for people to see is how beautiful things grow out of shit. Because, nobody ever believes that. You know, everyone believes that Beethoven had his string quartets completely in his head, they somehow appeared there and formed in his head, before he,' (hesitates) 'and all he had to do was write them down and they would kind of be manifest to the world. But I think what's, what's so interesting, what really would be a lesson that everyone should learn: things come out of nothing. Things evolve out of nothing. The tiniest seed in the right situation turns into the most beautiful forest. And then the most promising seed in the wrong situation turns into nothing.' 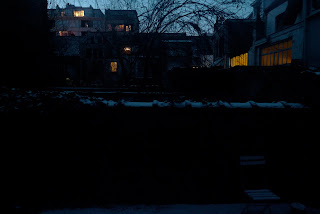