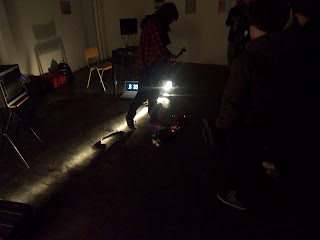 above: Luke from Thverfellshorn during his set, half past nine. David, from the Swedish onemanband Library Tapes, he'd been in crox before, didn't want any lightshow. During his set not much of anything half a photograph could be taken.
I would ask Luke, from Hampshire he is, west of London, Surrey, how he came to that name. He said he knew, thverfellshorn didn't sound like anything he had heard before, and maybe, if something better came to his brain. It's icelandic, he said. It says: a path along the edge of a mountain. There's no much of a mountain where he lives. He had a girl in Oxford and recalls how beautiful that county is. 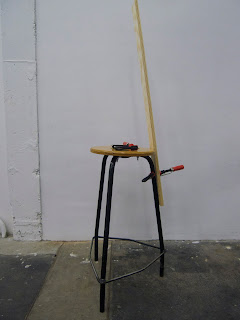 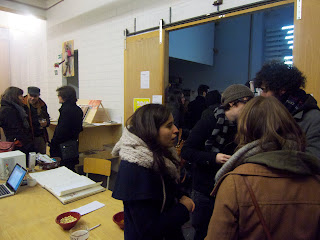 Unfortunately the gig had been planned only a few days ago, but David and Luke didn't worry. It made a double a dozen of people attending the concert, more than anyone else but me would have expected.
Gepost door van op woensdag, februari 01, 2012