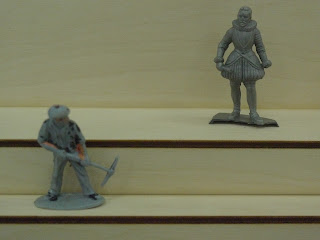 This theater seats more people than can actually view the performance. Row 46 enjoys the hairstyles of rows 35-39; they see nothing else. You can't hear music after 73. The air is thin by row 220. Those unfortunate enough to be in rows 400 and higher are never heard of again. It's the city's greatest mystery as to what lay beyond row 883. (JANITOR, The Gentlemen's Gentlemen, page 21) 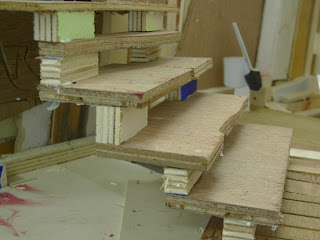 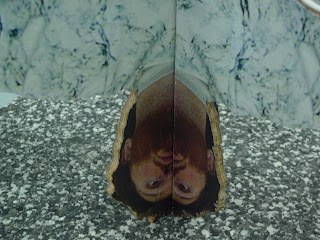 [op. cit. page 22, The chandelier spins in the air] [page 23] No, It's a face that comes from an insipidly good childhood: smothered features in a cloudy film. [His first line, page 23: This new one is no different than any other young hopeful. She's not pretty, not witty, not a musician, nothing mesmerizing about the way she moves,]
These lines picture the Actress as a spoiled young lady: (Actress sits down, disappointed, depressed. She twirls her thumbs and picks at her fingers. Gazes blankly.) Some would say [the chandelier adds] she's insatiably bored...
Rich family. Well-fed, no nosis for anything else but good clothing. Nothing pretty actually. She dresses as anyone of her age and social category would do (unremarkable, disappointingly meticulous).

The actress. Someone may call her a bit of a frump. The chandelier in particular can't see anything mesmerizing, as he calls it, about the way she moves. How stupid they were! the Janitor adds (page 15), making his final and fatal judgement some few pages further on, The names they were born with, the names that spoiled marriages, were forgotten, amnesia set in, ghosts possessed them. The actors were all but eaten; tied to the stage and the fire - not a ritual fire or a cleansing fire. Just a fire to cover up what they had done. One also may take notice of some of the earliest facts, as early as page 10, when she bows and bows and bows to the boisterous applause and continues to do so long after the applause silenced, becoming visibly bored and distressed without their applause, unable to think of anything else but the glitter and the butter, confronting the RA after a long pause with one of her basic inner shades: Are you wearing your finest clothes this evening? [page 12] 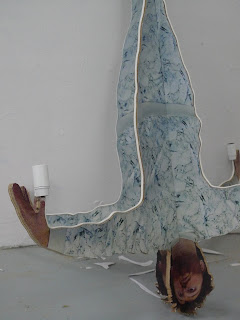 [op. cit. page 11] The GG stage is made up of two levels, TOPSTAGE and SUBSTAGE. They are connected by a tree-like structure based upon the Chair of Vérité in St.Baafskathedraal. A table and chair are wedged in the branches above. There is a rabbit hole between the stages, a tunnel from the side of SUBSTAGE that leads to the exit. 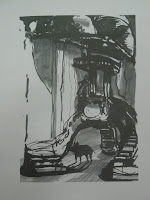 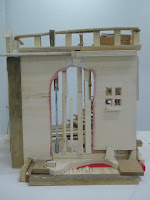 left Frank started working on it yesterday night. middle Pen-drawing from crox-book n°9, page 7, featuring the actress, the wild boar and above-mentioned tree-like structure. Something cute and in a way rather pleasant too should be said on the wild boar, as the pen-drawing definitly pictures the beast to be nothing else but a small dark-shaded pig.
down Hidden substage beneath the steps: 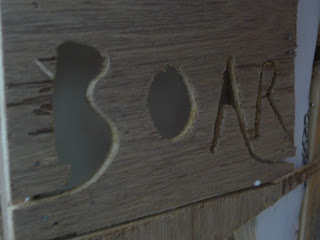 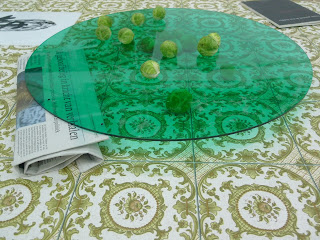 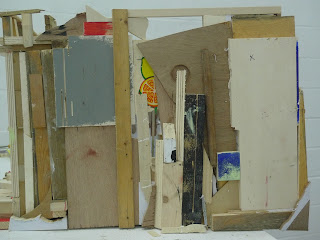 Some pages from the Pursuit sample of Frank: 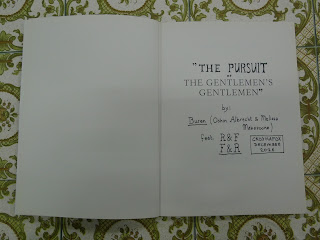 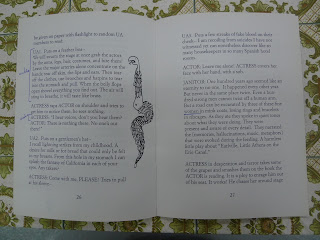 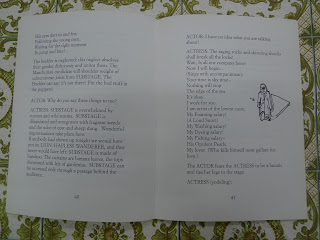 And here some more. Martijn, the freshly acquired assistent of buren, focuses on the chandelier. Frank on top of a selfmade flight of stairs. [translated from English to Dutch trap means vangen, beetpakken, beetkrijgen, beetnemen, pakken, vatten, valstrik, slag, val, all of that more or less identical. translated from Dutch to English it leads to a series of varying nouns: degree, grade, kick, shot, stairs, steps, staircase, stairway, flight of stairs.] A disarmed Monty Python prop. Oshin and Robbert meditate on a state of affairs. The hairdress, a creation of Oshin. 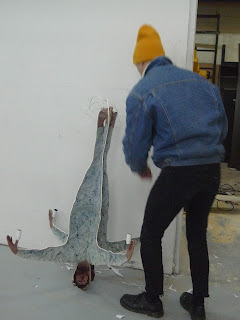 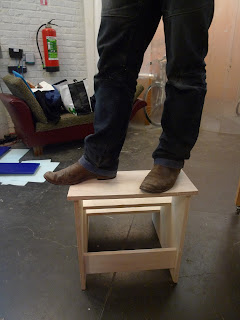 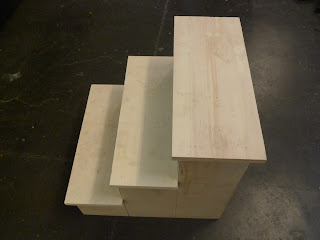 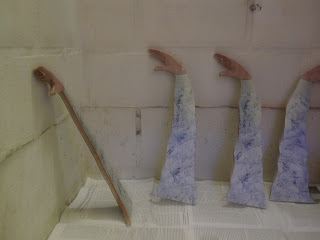 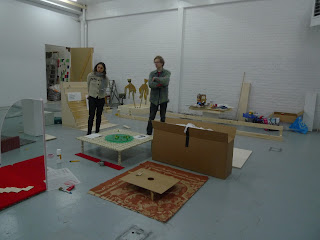 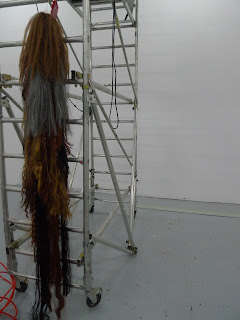